Reno’s Mid-century Motels: Then And Now

Reno is home to a collection of quirky, mid-century motels. Some have fallen into disrepair, some serve as low-income housing and some are being torn down for new developments. But if you were to drive through Reno during the middle of the 20th century, you would have seen a booming motel landscape, when motels were icons of the vibrant tourism industry.

In the early years of the 20th century, auto tourism was shaping the country. The establishment of the Lincoln Highway in 1913, carved a route for travelers headed east or west, and Reno sat at an important junction on the highway, halfway between Salt Lake City and San Francisco. It was the ideal location to rest and refuel for the night.

Corri Jimenez is an architectural historian and an adjunct professor in the Historic Preservation Program at the University of Nevada, Reno. She studies mid-century motels and explains how Reno became a hot spot for auto camps and motels to thrive:

Auto camps emerged in this first wave of auto tourism, and eventually Reno made it on the map for some of its more infamous industries. Legal gambling and lenient divorce laws had tourists arriving in droves, so motor hotels, or motels, started offering more long-term lodging accommodations. This appealed to the people staying in Reno to meet the six-week residency requirement for a quick divorce. Places like the Siesta Motel offered cozy, private cabins for a rustic experience.

Motor vehicle production waned during World War II as tires and gasoline were being rationed. Following the war, the auto tourism industry started to take speed. American families could travel at their leisure, staying at one of the dolled-up motels along Lincoln or Virginia Street. Neon signage became one defining characteristic as the motels tried to entice the travelers passing by.

Many mid-century motels were designed with modern geometric shapes and angular rooflines, embodying the space-age googie style. The aesthetic can be seen in the former Roulette Motel (below) and was made popular across the country after World War II as America was looking toward early space exploration. Jerry Stefani, a Bay Area native, recalls weekend road trips with his family during the ‘60s and ‘70s:

By 1960, the Squaw Valley Olympics brought athletes and tourists from all over the world and Reno was ready to welcome the thousands of visitors as a spillover from the Olympic Valley. The Chalet Motel, built in 1959, mimics a comfy chalet in a ski village.

Following the transportation boom of the mid-century, complex interstate highway systems were put in place with the Interstate Highway Act, redirecting traffic away from many of Reno’s smaller in-town roads. Interstate 80, which was built in the 1970s, bypassed U.S. 40, diverting a major source of business away from the motels and auto courts built along the Lincoln Highway (present-day Fourth Street). The interstate made travel faster and more convenient, but travelers sped past the motels for their final destination.

As traffic dwindled toward the end of the 20th century, motels found a new purpose fulfilling a need for affordable housing. Motels have maintained that reputation, oftentimes providing shelter for people who would otherwise be on the street. Today, mid-century motels are at the center of conversations around revitalization, affordable housing and historic preservation.

In recent years, Reno city council members authorized the demolition of several mid-century motels, stating that the motels were in a blighted condition beyond saving. Above, you can see the former Mardi Gras Inn, which was demolished earlier this year. While some motels are the target of blight demolition, some are being sought out for adaptive reuse.

Adaptive reuse refers to the process of reusing an existing building for a purpose other than what it was originally built for. ZoAnn Campana is on the City of Reno Historical Resources Commission and is the vice president of the Historic Reno Preservation Society. Campana discusses the challenges of preserving the recent past:

Two examples of adaptive reuse:  The renovation of the Coach Inn, now 21 on Center, which led to the ‘60s motel being converted into studio apartments in 2018. And, the former Classic Center Lodge, now Center Pine, was renovated and repurposed as a multiuse building, home to Pine State Biscuits, a barbershop, office space and renters.

All present-day photos were taken by Lauren Bain in May and June of 2019. Corri Jimenez and Alicia Barber served as historical experts for this project. Check out Corri Jimenez’s study documenting many of the motels on a Google map at mid-century Motels in Reno and Sparks and the website and smartphone app  Reno Historical hosted by the Special Collections Department of the University of Nevada, Reno Libraries. Historical photos were provided by the UNR Special Collections Department, Mike Roberts and Jerry Stefani. Stefani is the author and photographer of the website Stefani Drives Vegas. Digital assets are displayed with JuxtaposeJS by Knight Lab. 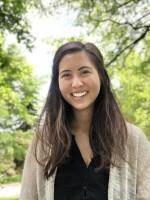 Lauren Bain
Lauren Bain is a senior at the University of Nevada, Reno finishing up a dual-major in journalism and French. At the Reynolds School of Journalism, she directed a https://www.youtube.com/watch?v=9f7lBjpK8us">documentary about Reno’s old Chinatown, shared stories about https://www.youtube.com/watch?v=wc3bg4D9RaI">local refugees, and produced a multimedia story about a doggy slumber party with Next Generation Radio. As the student president of the Online News Association-Reno, she organizes events to learn about new trends and tools in the evolving digital media space. A local Reno native, Lauren has always had a passion for community based journalism to share and inspire human stories.
See stories by Lauren Bain
Related Content