Is The Robotic Revolution Upon Us?

For nearly a century, they’ve been at the forefront of science fiction. They’ve been both heroes and villains. Sometimes they’re highly sophisticated and intelligent, while others are a bit more bumbling and even neurotic. We’re talking, of course, about robots.

In this episode of Science Distilled, hosts Paul Boger and Michelle Matus explore the robotic revolution and what effect it may have on the future. Will automation take over the job market? Why do robots have such a hard time understanding human? And when can we expect to see a self-driving car?

That very topic was discussed earlier this year at the Science Distilled lecture series produced by the Terry Lee Wells Nevada Discovery Museum and the Desert Research Institute—both in Reno, Nevada.

Dr. Richard Kelley is the senior engineer at the Nevada Center for Applied Research at the University of Nevada, Reno. Dr. David Feil-Seifer is an associate professor of computer science and engineering, also with UNR. They both spoke at Science Distilled, and later with KUNR, about the current state of robotics and what robots may look like in the future. 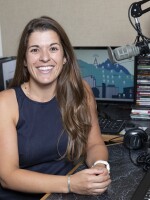