First Days In America: Crossing the Ocean to Study Trees

Emanuele Ziaco used to live in an Italian city older than the Bible, but in 2012 he moved to Reno to study trees.

Student reporter Joey Lovato recently spoke to him for NPR’s Next Generation Radio Program about his first days in America. The two also took a trip out in the woods to learn more about Ziaco's work.

America is the land of opportunities, and Ziaco Emanuele saw an opportunity in the U.S. to continue and expand his studies. So, he picked up and moved here, continuing his work and navigating life as an immigrant.

"I've seen many times, kind of a shadow of skepticism, toward me... from other people... many times I've felt like I've had to work harder because I'm an immigrant," said Ziaco.

When he first came to the U.S., his English was less than ideal, so he got by speaking Spanish. When he moved to Reno he mainly talked to the janitors at his lab, recalling one woman who was excited that he was Italian because he came from a Catholic country.

Ziaco’s field is in dendrochronology, which is the study of dating tree rings and seeing how the past climate has affected the growth of trees. He goes out into forests across the U.S. and takes samples from trees, and then takes them back to his lab to study not only the rings, as he used to back in Italy, but the cellular structure of the samples. He hopes that the cells from these trees, which can be thousands of years old, can lead us to unlock mysteries from the past and predict future climates.

But trees aren’t the only thing he has studied during his time in the US. He’s also observed the people.

Read the rest of this story here.

This story was produced during the NPR Next Generation Radio program, in partnership with the Reynolds School of Journalism at UNR and Reno Public Radio. 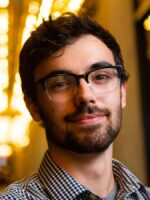