Kyle Edgerton is an immigration lawyer in Reno who regularly works with people seeking asylum. Before the pandemic started, immigration court proceedings were delayed across the country due to a large backlog. During the pandemic, those delays have been exacerbated. KUNR’s Tatiana Ramirez spoke to Edgerton to break down some of the challenges he’s been seeing on this front.

Tatiana Ramirez: On average, how long do you work with a client?

Kyle Edgerton: You know, that really depends. Some cases are in and out in two or three months if it’s something really simple. But when we’re talking about asylum cases, it’s usually a years-long process, and that’s for a couple of reasons. First of all, there is a massive backlog. So when you’re trying to guide a client through that process, they’re going to be dealing with months and months and months of delay just to get to their next hearing. That’s especially been the case here in Reno.

There’s a distinction between what’s called the detained docket and the non-detained docket. So whether or not someone is in the custody of the Department of Homeland Security, their case is going to move more quickly because that person has a liberty interest in resolving their case, win, lose or draw. Whatever it is, they want to get it done with because they’re locked up. And they’re locked up, often not because of anything they’ve done wrong, but maybe just the manner of entry or their immigration history, and that can be a whole separate conversation.

But if someone is locked up during immigration proceedings it doesn't necessarily mean that they’re a dangerous or scary person. So, people that are detained, their cases are going to move more quickly and might resolve themselves within six, nine, 12 months.

Ramirez: The last time you were in immigration court physically in Reno was in March of 2020. What has unfolded since then?

Edgerton: Within a week, two or three days later, we declared a national emergency and immigration court was suspended. And it hasn’t come back [to] Reno for non-detained master hearings. These intermediate hearings that we have, to kind of make sure all the evidence is in and everyone’s clear on how the case is going to proceed, those cases haven’t happened in Reno for the last year, plus.

Ramirez: Have you seen an increase in clients seeking asylum since the start of the pandemic?

Edgerton: I wouldn’t say there has been an appreciable increase in asylum seekers, so far in 2021 versus 2020. And of course, in 2021, we’ve had the Biden administration, and in 2020 we had the tail end of the Trump administration. And so, both during 2017, 2018, 2019, 2020, the four years that Trump was in power, there was still a steady flow of people, mainly from Central America, from what we call the Northern Triangle countries, people who were fleeing desperate circumstances in those countries - gang violence, corrupt governments, personal persecution based on their identity like I mentioned, fleeing because the situation there was so terrible that they were coming to the US border.

So, even when the pull factors were relatively weak, the push factors were still so profound in Central America and Mexico that people were still coming in large numbers. Again, the talking point that there has been a surge, the talking point that we’re approaching the highest level since 20 years ago, that is correct, but it is like saying the number eight is higher than the number seven. That’s true, but they are both closer to 10 than they are to zero.

Ramirez: Thank you for sharing your insights, Kyle. 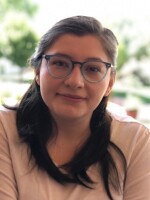 Tatiana Ramirez
Tatiana Ramirez is KUNR’s first events and community engagement coordinator, a position where she engages and creates connections with the community, finds pressing issues and develops events to help alleviate them.
See stories by Tatiana Ramirez
Related Content