The war in Ukraine is disrupting the world's supply of neon

The war in Ukraine is causing a shortage in one of the most important commodities in the world - neon gas. It's essential for making microchips like the ones in your laptop, your phone, your PlayStation. Now prices are up 5,000%. As Jeff Guo from our Planet Money podcast explains, the reason has to do with the Cold War, Soviet economics and dreams of space lasers.

JEFF GUO, BYLINE: Here's a funny thing about this neon shortage. Neon is a gas that's literally in the air all around us. You're breathing it right now. So any country in the world could, in theory, produce lots of neon. And yet, for a long time, most of the world's neon has come from just two places - Ukraine and Russia. The story of how that happened starts with the Cold War, with a discovery.

UNIDENTIFIED PERSON: It's a miracle called the laser.

GUO: In the 1960s, scientists started using neon in a powerful new kind of laser, a laser that could cut metals, perform surgeries and maybe also do scarier things.

UNIDENTIFIED PERSON: The laser literally can vaporize any substance on Earth instantaneously.

GUO: This neon laser technology got the Soviets really excited. They were even dreaming of space lasers. And since their ambitions required a lot of neon...

DICK BETZENDAHL: They produced large quantities for their military effort during the Cold War.

GUO: Dick Betzendahl is an expert on the neon market. He spent decades working with producers in the former Soviet Union, and he says the Soviets built more neon harvesting facilities than anyone in the world.

BETZENDAHL: It wasn't an economic decision. It was a decision based on, we might need it.

GUO: And that is why no one else was doing this.

BETZENDAHL: Well, yeah, because the rest of the world was Western in belief, and it was - everything is based on economics.

GUO: Whereas the Soviets didn't care as much about the economics. They were collecting the neon for their future laser projects, which maybe didn't all pan out. Then the Cold War ended, and all these neon facilities started selling to the rest of the world.

JOHN RAQUET: So all of a sudden, you had all this product on the market, and that caused a huge dip in pricing right across the board.

GUO: John Raquet runs the magazine Gasworld. It's like the Newsweek of the gas industry. He says at that point, in the 1990s, the world still wasn't sure what to do with all that Soviet neon. There's only so many glowing signs that humanity needs. That's why everybody was happy to sit back and let Russia and Ukraine make all the neon.

GUO: That was until about 10 years ago. As we were trying to make microchips smaller and smaller, we realized that neon-breathing lasers were perfect for etching these tinier and tinier circuits. That's when demand for neon started going through the roof. The Soviets imagined this future where they needed absurd amounts of neon for their laser space weapon fantasies. But now the world really does need tons of neon, not for death rays but for something way more important - to make Nintendos. So places like China have been trying to build their own neon facilities over the last five years, but it's not enough. Russia and Ukraine still make about a third of the world's neon. And now with Russia's invasion, much of that is offline, leaving most chip makers hoping for more supply soon. And because it's neon, that supply could come from, well, almost anywhere. Jeff Guo, NPR News. 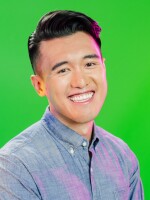 Jeff Guo
Jeff Guo (he/him) is a co-host and reporter for Planet Money, NPR's award-winning podcast that finds creative, entertaining ways to make sense of the complicated forces that move our economy. He joined the team in 2022.