We are experiencing signal outages in the Bishop/Mammoth Lakes area. We are looking into the cause and hope to have signal restored soon.
Energy and Environment

Pinyon-juniper woodlands stretch across much of the high desert in the American West. While quiet on the outside, this forest is at the heart of contentious debate between environmentalists, tribes and the federal government.

While these woodlands cover millions of desert acres, they are still among the least studied forest types in North America, according to the National Park Service.

Over the past 20 years, the Bureau of Land Management (BLM) has removed tens of thousands of acres of the pinyon-juniper trees, notably for sagebrush preservation and rangeland fire management.

Environmental groups, tribal leaders and pinyon-juniper conservationists have argued that removing these trees is harmful, not only to ecosystems but to the land itself.

Removing these trees in what BLM calls “treatment projects” includes methods such as bulldozers, ship anchor chaining, hydro-axing, roller chopping and mastication, according to Colorado Parks and Wildlife. These treatment projects vary in scale.  For example, the BLM recently began a project that will remove about 24,000 acres of pinyon-juniper over the next 10 years from a 132-square mile area in the Egan and Johnson Basin in Ely, Nevada.

Clearing the dense pinyon and juniper trees can reduce fire risk. And forests are seeing longer and hotter fire seasons, which is a cause for concern.

“Anytime you’re reducing woody fuel or canopy cover ... it decreases the spread of fire,” said Christina Restaino, an associate professor at the University of Nevada, Reno and a natural resources specialist in wildland fire science.

Fire risk is much higher today because natural wildfires have been suppressed in the West for decades. This strict fire management has allowed forests to become overgrown, leaving thickened woodlands like the pinyon-juniper.

A newer approach to land management is necessary to decrease the fuel load, which may also help other vegetation in ecosystems where plants compete for water.

“There are too many straws in the cup,” Restaino said. “We have too many trees or plants soaking up that water that the ecosystems are stressed.”

Stressed ecosystems are more susceptible to fire, according to Restaino.

The U.S. Forest Service and BLM have made fire management a priority, but they can’t match the pace of the forest growth.

“One of the things that the experts are suggesting is that we need more management [of] wildfire,” Restaino said. “When a wildfire starts naturally from lightning during a time which it’s ecologically safe ... the conditions are such that it is appropriate to let that fire burn, those are the types of things that we can do to help increase the scale of management.”

The BLM is clearing pinyon-juniper to aid in wildfire prevention, but preserving the sage grouse species is also a priority.

The sage grouse relies on sagebrush for its habitat. Pinyon-juniper, along with grasses like dry, fast-growing cheatgrass, have encroached on sagebrush seas.

The bird is not officially listed as endangered, but the U.S. Fish and Wildlife Service says that the species is under real threat, particularly from habitat loss. The agency said the greater sage grouse species is threatened by invasive vegetation.

“They say it’s for fire suppression, sage grouse, and grazing purposes for the cattle,” said Vernan Rogers, a Northern Paiute land defender in Lovelock, Nevada. “We get a lot of excuses.”

Rogers has been working to stop pinyon-juniper removals since 2014, with other tribe members viewing the woodland removals as affecting tribal history.

“When those things [woodlands and animals] are gone, we no longer have that connection to the land. To us, it’s a man-made disaster,” Rogers said. “Every tribe all across the U.S. and Canada have used these places as their lifeline.”

Not only do tribes feel a spiritual connection to the woodlands, but many elements of the tree are used for food, medicine, and other cultural traditions like bow making and ceremonies.

“These flat areas are places we can take our elders to, so we take them to easy areas so they can access pine trees,” Rogers said. “They [elders] can’t climb the mountain.”

The pinyon-juniper species historically resides in higher altitudes within the western mountain ranges. But, research has shown the trees moving downward to lower elevations.

“The encroachment of pinyon-juniper has ecological consequences like changing the hydrology,” Restaino said. “They use significantly more water ... so that invasive species have more of a chance proliferating in those ecosystems ... and that has implications for fire.”

Thacker has been researching pinyon-juniper intrusion on sagebrush habitats, and his findings suggest that the treatment projects are helping restore sagebrush seas.

“There is solid evidence now from multiple studies that have found sage-grouse will use that additional habitat that’s created from removing the tree cover,” Thacker said.

The sage grouse evolved in areas with less than four percent of tree cover. They tend to avoid wooded landscapes for their survival and sagebrush is their primary food source.

The pinyon-juniper woodlands that BLM is targeting to remove in Utah are meant to push back the trees from areas historically dominated by shrubs and grasses, according to Thacker.

“We get sagebrush back much quicker because it’s naturally already there,” Thacker said.

Cutting down the overstory of pinyon-juniper can bring back sagebrush and sage grouse species, but Thacker said it would be naive to believe that’s the only goal of the BLM.

“Not all treatments done benefit sage grouse,” Thacker said. “I’m not going to tell you that those [traditional] areas are not being treated, but I know there is a concerted effort ... in Utah to not treat areas that are [historic] pinyon-juniper woodlands.”

Removing the pinyon-junipers can also lead to invasive species coming in, and even though clearing the forest is meant to prevent species like cheatgrass, this flammable grass is tricky to keep out.

“There is risk in some areas that when you remove the dominant vegetation, like the junipers, it opens up niches for other plant species to fill,” Thacker said. “If there is not more favorable vegetation or seeds, then the niches can be filled with cheatgrass.”

“I would be lying to you if I told you that never happens because it does,” he continued.

The species that come back are on a case-by-case basis. Sometimes sagebrush is very successful, but sometimes it's not, and removal sites take time to show signs of improvement.

The ecological systems are slow to recover and to return, taking upwards of five to 20 years, according to Thacker.

While there is an increased effort to restore sagebrush communities for sage grouse, pinyon-juniper is also a habitat for many species.

But, it can have other impacts, too.

“That is not how pinyon-juniper removals are done across the West. They are not always light touches on the landscape,” said Danielle Miles, wildlife researcher and instructor at the University of Nevada, Reno.

While the sites are not picked haphazardly, Miles says that BLM uses the umbrella term of sage grouse conservation for removing the trees.

“These organizations [BLM] don’t have to go through the same environmental impact assessments for these pinyon and juniper removals that they have to do for other large-scale projects,” Miles said. “You can remove thousands of acres, but ... they don't have to do ‘boots on the ground’ or follow-up studies about the results of their clearing.”

In Miles’ five years of research, she’s found that many species rely on the trees. Miles was studying how the pinyon-juniper removals were affecting bat populations in Northern Nevada before the pandemic halted that research.

However, before April 2020, Miles’ research found that bat activity in the woodland habitats was much higher compared to the sagebrush habitats.

Certain bats prefer the pinyon-juniper woodland habitats because of the high volume of insect activity, according to Miles.

“We have the potential of negatively affecting bat populations by reducing the woodlands they have,” Miles said. “If we lose this biodiversity, we will never have it again.”

Miles doesn’t think pinyon and juniper removal will cease anytime soon, but she hopes her research on the woodland’s ecosystem will help identify areas that need protection so that BLM can be more strategic in their clearing projects.

CORRECTION: This story has been corrected to reflect that the BLM plans to remove roughly 24,000 acres of pinyon-juniper in the Egan and Johnson Basin in Ely, Nevada. Editors also removed a photo from this story because its geography could not be verified. Finally, the headline has been revised to state that pinyon-juniper removal reduces fire risk.

Emilie Rodriguez is a senior at the Reynolds School of Journalism. She is a student reporter with KUNR Public Radio and The Hitchcock Project for Visualizing Science. 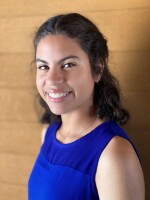