We are experiencing signal outages in the Bishop/Mammoth Lakes area. We are looking into the cause and hope to have signal restored soon.
Wildlife

Biologists and veterinarians in California and Nevada are investigating a puzzling disease that has been causing bears to experience encephalitis, a sometimes fatal inflammation of the brain.

Bears with encephalitis present various symptoms, including a head tilt, tremors, an overly friendly personality and a lack of fear in response to people or dogs.

Since the first case was discovered in 2014, the Nevada Department of Wildlife, or NDOW, has found 10 bears displaying similar conditions and symptoms across the Tahoe Basin.

California has seen slightly higher numbers, with 14 sick bears in the same time span. Veterinarian Brandon Munk works for the California Department of Fish and Wildlife. He said the department has found multiple cubs with symptoms in California just this year.

“We’ve seen four bears so far this year that were really sick [neurologic],” said Munk. “[They] were euthanized and confirmed to have encephalitis, presumably the same condition.”

One of the most notable incidents occurred in 2019 when a snowboarder was approached by a young bear at Northstar California Ski Resort.

According to Munk, the bear went through numerous tests after being captured in order to figure out what was going on.

“We basically exhausted all of our diagnostic options short of an MRI,'' said Munk. “We were unable to confirm encephalitis in this bear but suspect it had this condition.”

Munk said the bear was placed in a facility for permanent care but has developed seizures, which he assumes is a continuation of the condition.

NDOW Wildlife Health Specialist and Veterinarian Nate LaHue said that although they understand the symptoms, it’s still a mystery as to what is causing them.

“We’ve done a lot of investigation into finding a causative agent in these cases,” said LaHue. “We’ve found some things that warrant further investigation, but we can’t say definitively if this is a single disease or many things resulting in the same problem.”

Although potential causes are mostly speculative at this point, LaHue said that researchers have found a family of several new bear viruses that could potentially be the culprit.

“We identified several new viruses that were previously unknown,” said LaHue. “Some of those are not related to this disease and [are] just normal bear viruses, but some are suspect.”

According to LaHue, it’s also possible that many bears may carry the disease, but symptoms are only triggered by changes to the bears’ environment. He said that just as in humans and other animals, increased stress from lack of food or various other health factors could be a trigger.

While rehabilitation efforts have been ineffective due to the declining condition of these bears, NDOW does not see this virus as something that is going to impact the state’s bear population.

“We continue to have a good bear population in Nevada,” said LaHue. “In a world of negative stories about diseases impacting wildlife, it doesn’t seem like this disease has reached the level of causing population impacts.”

Black bears are the only bear species to naturally inhabit Nevada. The population currently sits between 300 to 400, mostly across the far-western region of the state.

NDOW is a small agency, so it heavily relies on public observations concerning bears displaying odd behavior. The public can report all bear-related incidents to NDOW's Bear Hotline by calling (775) 688-BEAR (2327).

Russell Reinap is a senior at the Reynolds School of Journalism. He is a student reporter with KUNR Public Radio and The Hitchcock Project for Visualizing Science. 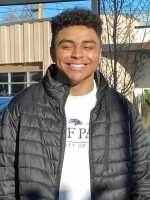