We are experiencing signal outages in the Bishop/Mammoth Lakes area. We are looking into the cause and hope to have signal restored soon.
KUNR Youth Media

A Look At Lime Bikes Across The Region

A bike sharing program called Lime Bike is now available through a pilot program in Washoe County, including Reno and Sparks. Before launching in those areas, the company also did a trial run in South Lake Tahoe. Molly Concialdi of Reno Youth Radio visited the lake to see how the program works.

Driving or walking around South Lake Tahoe, you might see a couple of bright lime green bikes. Usually, they are just sitting around like someone left them there on the sidewalk, propped up on a kickstand. Sometimes people grab one and ride it around.

They are actually a part of a bike-sharing program that was initiated in South Lake to promote bike riding. Each bike has a GPS unit, so people can find it through an app on their phone. When you find one, the first hour is free and then it is $2 an hour. I talked to Nick Fong, Lime Bike's Lake Tahoe General Manager, about how it all works.

“We are a smart dockless bike-share program," Fong explained, "so every single bike is powered by a solar panel. You can just download our app, set up your account and then, when you see one of our bikes, you can just scan our QR code and it'll send the signal to unlock the bike. You just ride the bike where you need to go, park responsibly, and then be on your way," said Fong.

It was pretty fun and easy. I talked to Guofeng Liu, a Reno local who tried it out, too.

He saw similar bikes back in China. He was pretty excited except for the price.

“It only costs one Chinese gram, which is one-sixth the price of that. There are like hundreds of those in every community,” Liu shared.

He says it’s a lot cheaper in China. Typically, you would see bike-sharing programs like these in large cities, like where Guofeng lived. I also called Darcie Collins, Executive of Keep Tahoe Blue, to find out why they partner with Lime Bike.

“League to Save Lake Tahoe, wanted to work with a company such as Lime Bike to bring alternatives to driving in cars to Lake Tahoe," Collins said.

She says Lime Bike was the best option for South Lake Tahoe because it uses technology on your phone and you can leave the bike anywhere you are.

The program continues this summer in South Lake and in Washoe County, and a thousand Lime Bikes are scattered across the Truckee Meadows. Along with Reno and Sparks, you can find them at the University of Nevada, Reno and the Reno-Sparks Indian Colony. 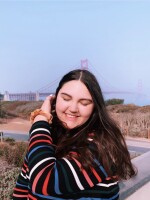 Molly Concialdi
Molly Concialdi is a freshman at the University of Nevada, Reno. Molly studied video production all throughout high school and gained her first public radio experience with KUNR’s Reno Youth Radio internship as a high school student at the Academy of Arts, Careers and Technology (AACT).
See stories by Molly Concialdi
Related Content