We are experiencing signal outages in the Bishop/Mammoth Lakes area. We are looking into the cause and hope to have signal restored soon.
KUNR Station

The KUNR newsroom has earned several awards from multiple contests for work produced by its reporters, editors, digital staff members, and student reporters in 2019.

These stories would not be possible without the generous support of our community as well as our close partnership with the Reynolds School of Journalism at the University of Nevada, Reno. Many of the honorees were students or recent graduates of the Reynolds School when they filed these award-winning stories.

The regional Edward R. Murrow Awards are decided by judges for the Radio Television Digital News Association. The contest honors “outstanding achievements in broadcast and digital journalism” according to the RTDNA website. Here are the categories KUNR won in the small market radio division:

Karina Gonzalez has earned a national Gracie Award in the Radio Interview Feature student category from the Alliance for Women in Media Foundation for her story A Mother Reflects On Her Daughter’s Suicide. Karina produced the audio story along with https://www.youtube.com/watch?v=9OjGpTdu_Nk" target="_self">a video component for digital audiences while interning for both KUNR and Noticiero Móvil, a bilingual multimedia outlet run by the Reynolds School of Journalism. Karina received editorial guidance from Vanessa Vancour and Michelle Billman.

The KUNR segment “Time & Place with Alicia Barber" has received a national first-place recognition from the Public Media Journalists Association in the “Collaborative Effort” category.

These history segments were written, voiced, and produced by local historian Alicia Barber with editorial and technical support as needed from the KUNR news staff. Each segment incorporates sound bites from oral histories of people across the region that were recorded decades ago. That audio is provided by the Special Collections Department at the University of Nevada, Reno.

Along with sharing local history with KUNR listeners, Alicia’s segments have also been used by the Washoe County School District for various history lessons. You can explore the entire "Time & Place" collection here. 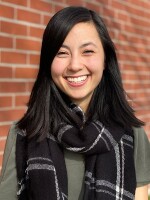 Crystal Willis
Crystal (she/her/hers) is a digital editor and joined the KUNR team in 2020. She enjoys leading a viewer through her work by providing well-balanced visuals that tell a story.
See stories by Crystal Willis
Related Content