Reno Gets More Snow Than Tahoe

A snow storm warning remains in effect until early Wednesday for much of north central and northeastern Nevada.

As of Monday afternoon, the system had dumped six to as many as 14 inches around the Reno area according to National Weather Service Meteorologist Mark Deutschendorf.

"We expected this snow several days in advance however the amounts came in much higher because the storm came in much stronger in the area, and the heavier snow persisted for several hours longer," he explained. "And it  happened right over the highest populated areas of Western Nevada."

Deutschendorf said the highest amounts of snow accumulation in the Sierra Nevada have been along I-80 in the Truckee and Donner Summit areas with more than ten inches.

Less snow was reported at Lake Tahoe, with only about 3 inches at lake level in Incline Village as of Monday afternoon.

The National Weather Service says the storm warning includes Battle Mountain, Elko, Carlin and Wells, along with parts of Lander, Eureka and Elko counties stretching to the Utah line. 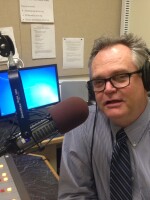