Biden Rally In Sparks Focused On U.S. Tension With Iran

The former vice president rallied with more than 500 voters at Sparks High School, according to campaign officials.

Biden criticized Donald Trump, saying the president has not kept his promise to end wars in the Middle East, where tensions have grown in light of Trump’s recent order of an airstrike that killed Iran’s top military leader.

“You had in Iran, just less than a month ago, tens of thousands of people marching against, against, the government in Iran,” Biden said. “... Now, you have a million marching in support of the government... we’ve now added another 18,000 combat troops to the region. A man who said he was going to get us out of Middle East wars.”

Many attendees, including Frank Lemus, say foreign policy is a key issue this election, though Lemus remains unsure who he will be caucusing for.

“I think foreign policy right now is a really important one, and I think right now that's a critical part to the safety of our country,” Lemus said.

“He understands the seriousness of what's going on in this country in relationship to the rest of the world,” Archambault said. “Our standing is in jeopardy. Our whole future is in jeopardy.”

After Biden’s visit to Northern Nevada, he made a stop in Las Vegas to address issues affecting Hispanic communities, like immigration -- a topic he did not touch on in Sparks. 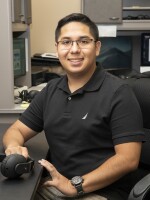