Governor Sisolak signed a bill Monday that will make Nevada use 50% green energy by 2030. Renewable energy is something presidential candidate Beto O’Rourke spoke about to students as he visited this swing state Thursday. KUNR's Paolo Zialcita has the story.

O’Rourke answered questions at a small coffee shop packed with students near the University of Nevada, Reno.

He said the US government has a key role to play in cutting greenhouse gas emissions.

"So, much of that will center on wind and solar and geothermal and renewable energy resources that allow us to meet that goal, as well as enlisting the aid of farmers and rural communities who can capture more of the carbon out of the air, and disturb less of it that is in the soil," O'Rourke said.

But O’Rourke was short on specifics.

“Free community college for every single American and debt-free if we attend public-serving, public-financed four-year universities in this country," O'Rourke said.

Several other candidates for president have courted voters in Nevada in the past month.

This story was produced in partnership with the California Report by KQED. 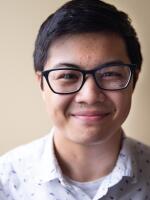