Reno is one of 47 sites nationwide now designated for refugee resettlement, so the Reno Gazette-Journal hosted a town hall to delve into that process. Our contributor Tim Lenard reports.

Retired Brigadier General Pamela Milligan sponsored the Kubuya family from the Democratic Republic of Congo. She even hosted them for a week when their apartment wasn’t ready.

"I have said before that my husband and I have a front row seat to watching the American dream come true,” she said. “We got very close up and personal about who they are and what they wanted, and Mr. Kubuya really thinks it was divine intervention that brought him here."

The town hall was sold out and the only criticism came in the form of Facebook comments concerned about how thoroughly refugees are vetted. At the event, panelists said refugees are actually the most thoroughly vetted immigrants to the U.S.

"I take a lot of pride in bringing these people to my community,” Mahler said, “and showing them what my country is willing to do for you and watching them want to give back."

The international center is planning to sponsor 75 refugees over the next year. 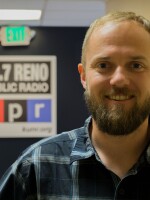