Our KNCJ web stream is experiencing an outage. We apologize for the inconvenience and hope to restore this streaming service as soon as possible.
Local Stories

Anxiety Mounts: One DACA Student In Reno Shares Her Story

The deadline for Congress to come to a decision about the future of the Deferred Action for Childhood Arrivals program has come and gone with no clear solution. The 700,000 recipients are living in a continued state of uncertainty. Our reporter Camille Stuyvesant recently spoke with a local DACA recipient about her experiences.

Sharing Her Story For The First Time

Neftalí Cruz Nicolás is just one of the hundreds of thousands of so-called DREAMers waiting to see what will happen next. By having DACA, she was able to enroll at Truckee Meadows Community College and work part-time, until she had to leave school to help provide for her family.

Nicolás recently shared her personal story publicly for the first time at a small event at UNR. Her previous hesitation of speaking publicly comes from the fear her parents felt of being deported. She describes the experience as nerve-wracking, but necessary to bring more attention to the realities of someone who has DACA.

Nicolás’ father came to Reno from Mexico with his brother when she was 3 months old. For him, it was out of necessity to help provide for his family.

“We needed the money. There was no way he would be able to provide for my mom and myself only earning 300 pesos a week, which is the equivalent to 30 bucks,” Nicolás said.

His plan was to earn enough money and rejoin his family in Mexico. Only working minimum wage jobs made this goal harder to achieve than he had previously anticipated. Nicolás’s mother made the decision to join him eight months later after her told them he hadn’t earned enough money to come back to Mexico.

Throughout high school, Nicolás had a goal to be the first member in her family to go to college. She took AP and honors classes in order to make this dream become a reality. Her senior year of high school, however, she met with a counselor who told her going to college wouldn’t be a possibility due to her legal status. Without a social security number, Nicolás wasn’t able to apply to colleges.

“I felt completely heart-broken. I felt that all of the work I did was basically for nothing and I’m going to have to find another way of income, because if I can’t go to college, I still need to still try and help my family,” Nicolás said.

In 2012, the Obama administration announced a new program called the Deferred Action for Childhood Arrivals, which gave immigrants who came to the country illegally as children the opportunity to go to school and to work, without the fear of deportation. Nicolás was selling tamales in Susanville with her cousin when she first heard about DACA.

“I was super excited,[DACA] was something for me to continue pursuing my dreams, and I don’t have to sell tamales for the rest of my life. The moment I received my stuff, I got my driver’s license and I applied for TMCC because I was so excited to go back to school,” Nicolás said.

Nicolás attended TMCC full-time while working two part-time jobs in order to pay for school. After the cost of school became too much, she had to drop out to help provide an income for her family. She is now able to go back to school and has plans of attending the University of Nevada, Reno next fall to study social work. Despite her plans, Nicolás's future ultimately remains in limbo until Congress decides the fate of the DACA program.

Camille Stuyvesant is a senior at the Reynold’s School of Journalism and works for Noticiero Móvil, a Spanish-English multimedia news outlet for Northern Nevada. 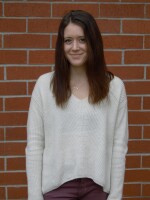