A new study suggests smoke from wildfires is more dangerous than other air pollutants for asthma patients.

Researchers looked at six years of data in and around Reno, Nevada, and found that high-pollution days caused by wildfire smoke sent a lot more people to the hospital for asthma.

Daniel Kiser, a Desert Research Institute data scientist, is the lead author of the study, which was published last month in the journal Environmental Health.

However, Kiser cautions that the effects from smoke can vary widely depending on geography and how far the smoke travels, and says the study doesn't offer a blanket conclusion.

“We definitely want to be careful about applying to other regions of the country as well, since they might have different types of particulate matter in the air, even with wildfires,” he said.

Asthma rates among adults in the Mountain West are above the national average of 7.7%, according to the Centers for Disease Control and Prevention.

An historic and ongoing fire season on the West Coast has sent thick smoke across much of the Mountain West in recent weeks, even as the region as a whole has had a relatively mild fire season. Extreme wildfires and the unhealthy smoke they produce are becoming more common partly due to climate change.

Meanwhile, those with asthma are already more susceptible to severe illness from COVID-19. 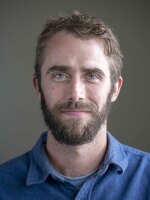